For their first incursion into the works of Schubert on disc, the members of the Cuarteto Casals invite us to discover two quartets situated at the two extremes of the composer's life. Wrongly dated much later on its publication in 1830, the Quartet in E flat is in fact the work of a 16-year-old musician who had just entered teacher training college . . . Whereas its companion here was to be Schubert's very last quartet. Only 13 years separate the two pieces! But in the meantime a whole world had invaded his musical consciousness, and here the naivety of G major throws a deceptive veil over inner upheavals.

“You’ll find plenty of Latin spirit in the Cuarteto Casals’s CD of two contrasting Schubert string quartets...Not all of the Casals’s current members are Spanish...But that never lessens the ensemble’s Latin passion and spunky attack. Their playing is a joy.” The Times, 27th July 2012 ****

“Their account of the great G major is something out of the ordinary — I don’t recall a performance of this work in which Schubert’s existential angst is so relentlessly projected...The tragedy and drama of this music have rarely been so harrowingly delivered on disc.” Sunday Times, 22nd July 2012

“The Cuarteto Casals makes a clear distinction between the comparatively placid, sometimes lively progress of the early quartet and tough, symphonic nature of the G major work. The playing of the latter is strong, uncompromising, excellently structured and considered” International Record Review, September 2012

“Among modern performances I have heard none that surpasses this for obsessiveness. Even so, the Cuarteto Casals manage not to fall into the trap of making this an aural ordeal for the listener...but here there is unnerving exhilaration of riding in a fast vehicle that seems thrillingly unable to stop.” BBC Music Magazine, November 2012 *****

“these musicians shape the lines to reflect both poetry and youthful spirit. The Casals rightly scale down their their steely resolve that paid dividends in D887 but prefer detachment to ardour, particularly in the slow movement.” Gramophone Magazine, Awards Issue 2012 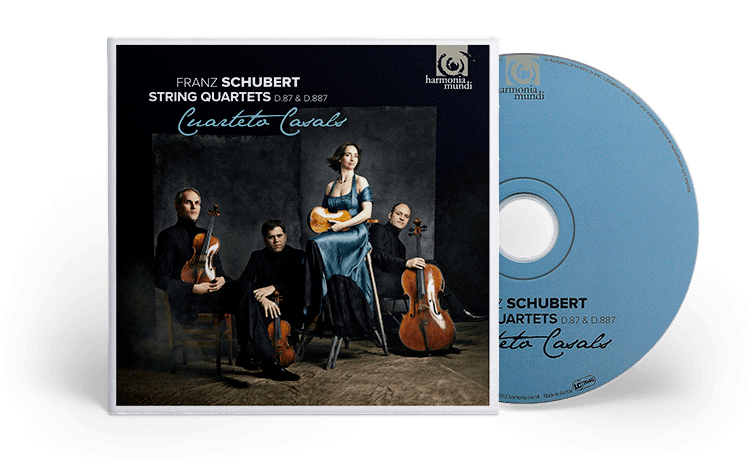